Nano Curcumin & Ginger Extract - A Step ahead in Lung Cancer 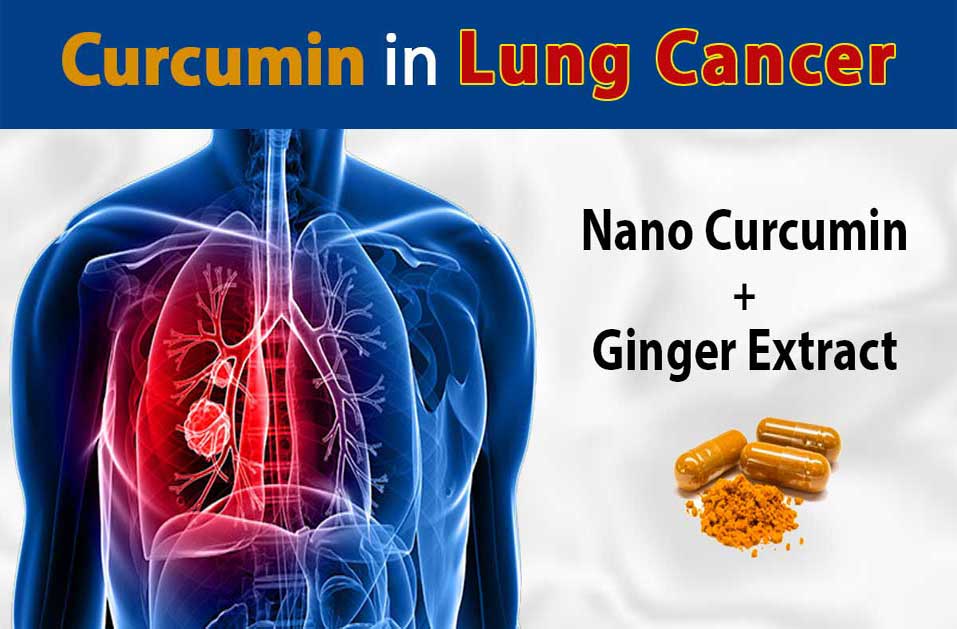 Lung cancer currently causes a huge number of cancer-related deaths around the world, and drugs available to help prevent the disease have limited benefits. Metastasis into neighboring and distant tissues as well as resistance of cancer cells to chemotherapy demand novel strategies in lung cancer therapy. Curcumin is a naturally occurring nutraceutical compound derived from indian spice turmeric that has great pharmacological effects, such as anti‐inflammatory, neuroprotective, and antidiabetic. The excellent antitumor activity of curcumin has led to its extensive application in the treatment of various cancers.

In up to 25% of people who get lung cancer, there are no apparent symptoms at the time of diagnosis. In others, symptoms can occur from the cancer itself, from the metastatic spread of the cancer beyond its origin in the lung, or from so-called para-neoplastic syndrome that result from the production of hormone-like substances by the lung cancer cells.

Signs and symptoms which may suggest lung cancer include:

There are 2 main types of lung cancer and they are treated very differently.

About 80% to 85% of lung cancers are NSCLC. The main subtypes of NSCLC are adenocarcinoma, squamous cell carcinoma, and large cell carcinoma. These subtypes, which start from different types of lung cells are grouped together as NSCLC because their treatment and prognosis (outlook) are often similar.

Adenocarcinomas start in the cells that would normally secrete substances such as mucus. This type of lung cancer occurs mainly in current or former smokers, but it is also the most common type of lung cancer seen in non-smokers. It is more common in women than in men, and it is more likely to occur in younger people than other types of lung cancer.

Lung cancer is the most common malignancy worldwide and a leading cause of cancer-related deaths. Seventy-five percent of lung cancer presents at an advanced stage where the existing treatment is not very effective and may result in tremendous patient morbidity. As a result, there is a significant interest in developing adjunctive chemotherapies to augment currently available treatment protocols, which may allow decreased side effects and toxicity without compromising therapeutic efficacy. Curcumin is one such potential candidate, and this review presents an overview of the current in vitro and in vivo studies of curcumin in lung cancer.

Curcumin (diferuloylmethane) is the most important component of the spice turmeric and is derived from the rhizome of the East Indian plant Curcuma longa. Curcumin has been used extensively in Ayurvedic medicine for centuries, as it is nontoxic and has a variety of therapeutic properties including antioxidant, analgesic, anti-inflammatory, and antiseptic activities.

Recently, curcumin has been widely studied for its anticancer properties via its effects on a variety of biological pathways involved in apoptosis, tumor proliferation, chemo- and radiotherapy sensitization, tumor invasion, and metastases. Curcumin can be an effective adjunct in treating solid organ tumors due to its properties of regulating oncogenes like p53, egr-1, c-myc, bcl-XL, etc.; transcription factors like NF-kB, STAT-3, and AP-1; protein kinases like MAPK; and enzymes li

Ginger has been cultivated for thousands of years as a spice and for medicinal purposes. Recent studies have shown that ginger has antioxidant, anti-inflammatory, and anti-tumor activities. However, it is unclear what the major active anti-tumor components in ginger are

The main principles in fresh ginger are the series of pungent oleoresin constituents known as gingerols, with [6]-gingerol being the major component. Whereas in dried ginger, shogaols, the dehydration products of gingerols during thermal processing, are predominant components. Their levels can be even higher than gingerols in some preparations. Most researchers have considered gingerols as the active principles and have paid little attention to shogaols.

For millennia, the ginger (Zingiber officinale Roscoe) rhizome has been traditionally used for various ailments, including many gastrointestinal disorders such as nausea, vomiting, and abdominal spasm, as well as rheumatic disorders, arthritis, and muscular discomfort. In recent years, scientists have revealed that various chemicals found in ginger rhizome—most notably gingerols, paradols, and shogaols—possess anticancer properties as shown many experimental models.